Businessmen, Obi Cubana and Cubana Chief Priest reacts as lady tattoos their names on her back

Popular businessmen, Obi Cubana and Cubana Chief Priest have reacted to a viral video of a Nigerian lady who tattooed their names on her back.

The viral clip shows the moment a tattoo artist was inking the names of the socialites on the lady’s back and the process allegedly took an hour to complete.

In another clip, the lady could be seen professing her love for the businessmen. She tattooed the words “Obi Cubana Chief Prince”, however the remaining words are not legible. 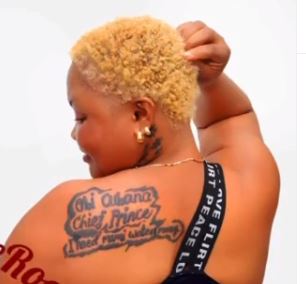 The video has stirred hilarious reactions on social media as netizens point out the visible error in the names of the businessmen.

Obi Cubana and Chief Priest spotted the video on social media and shared their thoughts on the lady’s gesture. Obi Cubana stated that the trouble is too much for him to handle in Igbo dialect.

Chief Priest, on the other hand, said he is ready to employ the lady as a waitress in his club.

“Make she come collect uniform do waitress job. Make she choose which branch she wan work. No be only Chief prince, na chief king”, he wrote.

Billionaire Obi Cubana dashes N2 million to 20 of his…

After private jet, Obi Cubana takes delivery of a Range…